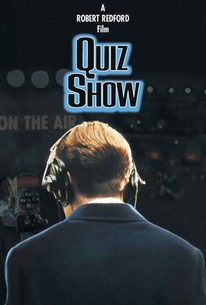 Robert Redford refracts the sociopolitical and moral issues posed by the subject material through a purely entertaining, well-acted lens.

These days Television game shows are strictly regulated to ensure that no cheating or discrimination goes on behind the scenes. But it has not always been so. "Quiz Show" tells the story of the discrimination, pay-offs, and resulting cover-up behind the scenes of "Twenty One," the most popular intellectual game show in 1958. The trouble begins when the show's producer Dan Enright pays winning contestant Herbie Stempel, a Jewish graduate student from Queens, to lose in favor of Columbia literature instructor Charles Van Doren, a handsome, intellectual WASP who came from one of the U.S.'s most distinguished families. Enright then persuades Van Doren to allow his staff to provide Van Doren with the answers before each show. Van Doren becomes a national hero and a champion for intellectualism. Enter Dick Godwin, a Harvard graduate working for the House-sub committee on Legislative Oversight. He suspects a fraud and goes looking for proof. He finds it in Stempel who finally admits that he was paid to lose. Thus the scandal erupts.

Reno
as Woman At Door

Richard Council
as Reporter No. 1
View All