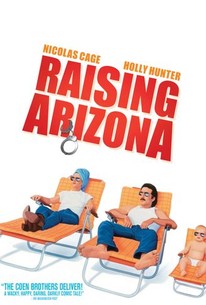 A terrifically original, eccentric screwball comedy, Raising Arizona may not be the Coens' most disciplined movie, but it's one of their most purely entertaining.

Combining influences from Tex Avery cartoons to Sam Raimi horror movies to 1940s B-movies, Joel Coen and Ethan Coen followed up the stylish film noir of their debut, Blood Simple (1984), with this frantic screwball comedy. H.I. "Hi" McDonnough (Nicholas Cage) is a philosophical but slightly dim career criminal who has been arrested so often that he gets to know "Ed," short for Edwina (Holly Hunter), the officer who takes his mug shots. Hi takes a shine to Ed and promises to go straight if she marries him. She accepts, and they move to the Arizona desert, where Hi holds down a factory job and blissfully watches the sunsets with Ed. Their serenity is shattered when the couple decides that they want a child and discover that, as Hi puts it, "Ed's womb was a rocky place where my seed could find no purchase." (One of the film's many delights is Hi's unexpectedly flowery dime-novel narration.) Ed goes into a severe depression until she sees an item in the news. Nathan Arizona (Trey Wilson), owner of a chain of unpainted furniture stores, has become the father of quintuplets, and he and his wife joke that they now have more children than they know what to do with. In what seems like a perfect "helps you, helps me" situation, Hi and Ed kidnap one of the Arizona infants, figuring that they'll have a baby and the Arizonas will have less of a burden. ~ Mark Deming, Rovi

Richard Blake
as Parole Board Chairman

Troy Nabors
as Parole Board Member

Mary Seibel
as Parole Board Member

John O'Donnal
as Hayseed in PickUp