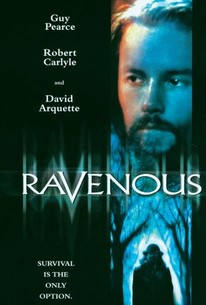 Ravenous tries bringing cannibal horror into an Old West setting, ending up with an uneven blend that will fail to satisfy most fans of either genre.

In 1847, many Americans made the journey across our continent in search of gold. Many failed to complete the journey or see their dreams come to light. Capt. John Boyd (Guy Pearce) found his way here thanks to an act of cowardice during the Mexican-American War; he has been banished to a desolate military outpost in California's Sierra Nevada mountains. Upon his arrival, he is greeted by a rag-tag group of soldiers manning the fort: Hart (Jeffrey Jones), the despondent commanding officer; Toffler (Jeremy Davies), the company chaplain; Knox (Stephen Spinella), the drunken doctor; Reich (Neal McDonough), the only real soldier of the group; and Cleaves (David Arquette), the heavily medicated camp cook. One day, Colqhoun (Robert Carlyle) stumbles into their camp. The half-starved Scotsman had been traveling with a group of settlers until they were snowbound. Unable to move forward, they took refuge in a cave, where once they ran out of food, they were forced to resort to cannibalism. Colqhoun barely escaped the madness -- or did he? Boyd and the soldiers hear of the old Indian legend of the Wendigo, which states a man who tastes the flesh of another steals that man's strength, spirit and essence. His hunger, however, will become an unstoppable craving. Like a vampire, the more he eats, the more he wants, and the stronger he will become, with death the only escape from the madness. The soldiers are soon drawn into the frenzy and Boyd is soon left with the choice of eating or being eaten. ~ Ron Wells, Rovi