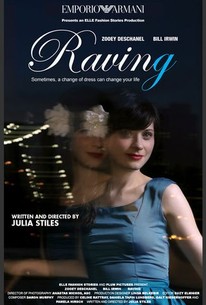 Omen and Mona Lisa Smile star Julia Stiles makes her directorial debut with this short film shot in collaboration with Elle Magazine and detailing a chance encounter between a beautiful young rebel and a lonely older man on a New York street corner. Produced by Plum Pictures and starring Zooey Deschanel and Bill Irwin, Stiles' film was inspired by an Elle article that originally appeared in the magazine's October 2006 Personal Style issue entitled "The Dress (shirt, boots, jacket, jewels...) that Changed my Life." In the article, twenty-five well-known celebrities from a variety of backgrounds discussed how the clothing choices they made helped to shape their identity. Featuring costume and style consulting by Elle Style Director Isabel Dupré, hair and make-up by Elle Beauty Director Emily Dougherty, and cinematography by Mona Lisa Smile Director of Photography Anastas Michos, Raving, as well as additional behind-the-scenes footage of the production, would both be featured on the official Elle Magazine website.

There are no critic reviews yet for Raving. Keep checking Rotten Tomatoes for updates!

There are no featured audience reviews for Raving at this time.