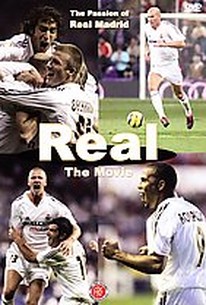 Helmed by Borja Manso, the Spanish-language omnibus feature Real: The Movie (aka Real, La Pelicula) pays homage to the Madrid-based Real soccer club, its superstar player, David Beckham, and its tie-in of international Real apparel, with a series of five fictional shorts and one documentary segment, connected only by their shared theme of the club itself. The first segment, set in Madrid, involves a rather low-key and ineffectual schoolteacher, Tomas (Javier Albala). At a loss to explain the enormous, sweeping popularity of Real, he decides to solve the mystery of the club's rabid fan base by going straight to the heart of the action. The second, set in Japan, involves the insecure Koji (Keiichirou Sasaki), made increasingly jealous by his girlfriend Sayaka's (Ari Ohta) preoccupation with Beckham. The third, set in Manhattan, involves amateur soccer player Megan's (Jessica Bohl) crippling injury, and the inspirational stories of Real team member Ronaldo that help her bounce back. In the fourth, Maxi (Guillermo Herrera) and his grandfather Paul (Manuel Escolano), research the little-publicized 1963 kidnapping of Alfredo di Stefano. In the fifth, set in Senegal, die-hard Real fan Ansou must endure a two-day walk, once per week, just to reach a television set and catch a glimpse of his favorite team. And the closing number, set to inspirational music à la John Williams, houses tightly edited-together documentary footage of a shoot-out between Real Madrid and Barcelona. Throughout the effort, Manso intercuts a substantial amount of never-before-seen footage that depicts Real off the field. ~ Nathan Southern, Rovi

Critic Reviews for Real: The Movie

There are no critic reviews yet for Real: The Movie. Keep checking Rotten Tomatoes for updates!

Audience Reviews for Real: The Movie

There are no featured audience reviews for Real: The Movie at this time.