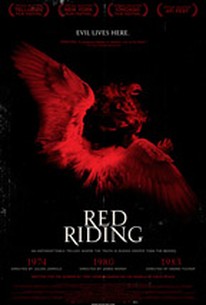 This crime drama features great performances and the three directors make the setting -- 1970s and 1980s Yorkshire -- an immersive, gritty, and dangerous place.

Sure to be one of the cinematic events of the year, RED RIDING is a mesmerizing neo-noir epic based on factual events and adapted for the screen by Tony Grisoni (FEAR AND LOATHING IN LAS VEGAS) from David Peace's electrifying series of novels. An official selection of the Telluride, New York, Chicago and AFI Festivals, and acclaimed by critics an eminent accomplishment, the trilogy follows several characters in intertwining storylines united by the horror wrought by the "Yorkshire Ripper," a serial killer who terrorized northwest England in the 1970s and '80s.The three films are directed by three notable filmmakers--Julian Jarrold (BRIDESHEAD REVISITED), Academy-Award(R)-winner James Marsh (MAN ON WIRE) and Anand Tucker (SHOPGIRL). Each boasts a stellar British cast that includes Andrew Garfield (THE IMAGINARIUM OF DOCTOR PARNASSUS), Sean Bean (LORD OF THE RINGS), Paddy Considine (DEAD MAN'S SHOES), Rebecca Hall (VICKY CRISTINA BARCELONA), and Peter Mullan (TRAINSPOTTING).RED RIDING - 1974 (Directed by Julian Jarrold) centers on a rookie journalist, Eddie Dunford (Andrew Garfield), whose investigation of a series of child abductions and murders leads him to suspect that there's a terrifying connection between the perpetrators and the upper echelons of Yorkshire power. (105 min.) -- (C) IFC

Critics Consensus: From Paris With Love Is Not Bon
View All