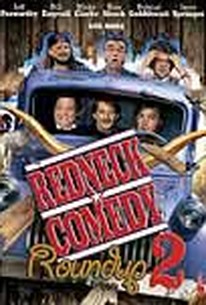 Grab a cold one for the second volume of this oddly named yet hilarious comedy showcase starring some of America's best-loved funnymen. (After all, who ever thought that London-born Jerry Springer and New York native Bobcat Goldthwait could qualify as "rednecks"?) Other names on the marquee include Bill Engvall, Blake Clarke, Ron Shock and, of course, Georgia boy Jeff Foxworthy, who owns the real rights to redneck jokes.

There are no critic reviews yet for Redneck Comedy Roundup 2. Keep checking Rotten Tomatoes for updates!

There are no featured audience reviews for Redneck Comedy Roundup 2 at this time.