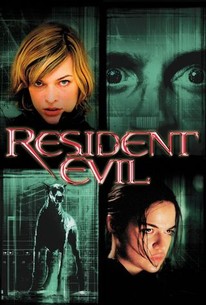 Like other video game adapations, Resident Evil is loud, violent, formulaic, and cheesy.

The director of Mortal Kombat (1995) adapts another popular video game for the big screen with this gory action thriller. Milla Jovovich and Michelle Rodriguez star as Alice and Rain, two members of a commando team assigned to infiltrate the Hive, an underground research laboratory owned by the faceless conglomerate known as the Umbrella Corporation. A bio-engineered virus has been released into the maze-like Hive, turning the facility's employees into mindless, flesh-eating zombies. A single scratch or bite from one of these rampaging ghouls dooms its victim, so the commandos have their work cut out for them as they attempt to reach the Red Queen, the lab's supercomputer -- and their sole hope of halting the spread of the contagion. Before they can complete their mission, however, the soldiers must overcome a variety of deadly obstacles, including mutant dogs, lasers, and a genetically altered beast known as The Licker, whose strength increases with every victim it slays. Alice and Rain also discover that the release of the virus may not have been an accident, and that a cure may exist somewhere in the deadly Hive. Resident Evil co-stars Eric Mabius, James Purefoy, Martin Crewes, and Colin Salmon. ~ Karl Williams, Rovi

Liz May Brice
as Medic

Joseph May
as Dr. Blue

Torsten Jerabek
as Commando 1
View All