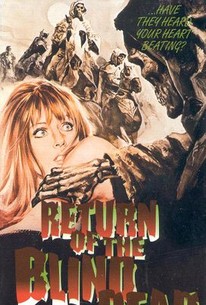 The satanic Templars return for more bloodletting and mayhem in this sequel to Tombs of the Blind Dead. This time around, the Templars are shown in flashback killing and drinking the blood of a virgin -- a process by which they hope to achieve eternal life. Local villagers arrest them, scald out their eyes with their torches, and burn the knights at the stake. This differs from the first film which had a legend explaining that crows ate out the Templars' eyes after they had been hung. Either way, the evil blind knights awaken during a festival celebrating the 500th anniversary of their defeat at the hands of the villagers. The drunken shouts of partygoers are quickly replaced by screams at the sight of the skeletal zombies and the massacre is on. A group of survivors -- including fireworks ace Jack, his old flame Vivian, the town's crooked mayor, and a few other eventual victims -- all gather in an old church that is quickly surrounded by the saber-swinging ghouls. One by one, they make idiotic moves that get them killed until only Jack, Vivian, and a little girl remain. As dawn approaches, they make their move to escape in a tense climactic scene that ends in a surprisingly effective twist. Tombs of the Blind Dead was followed by El Buque Maldito.

Jose Canalejas
as Murdo
View All