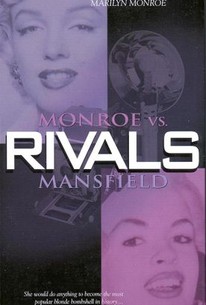 She was born Norma Jean Baker, a Los Angeles native who became a Hollywood starlet and sex symbol in the 1950s. Marilyn Monroe personified the glamour, glitz and innocence of that era, a high-profile calendar girl who starred with some of Hollywood's finest leading men, she married two high-profile men baseball legend Joe DiMaggio and playwright Arthur Miller. Her rise to fame was always unstable and she died alone in her bed in August 1962. Her contemporary during that same era was Jayne Mansfield born Vera Jayne Palmer who became one of the most outrageous starlets in Hollywood. Both women were blonde, sexy, desirable and captured the essence of the culture during the 1950s. This program revisits their unspoken rivalry.

There are no critic reviews yet for Rivals!. Keep checking Rotten Tomatoes for updates!

There are no featured audience reviews for Rivals! at this time.