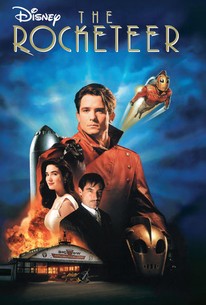 An action-packed, if anachronistic, look back at pulp matinee serials, The Rocketeer may ring hollow with viewers expecting more than simple fun and gee-whiz special effects.

After getting his start as a visual effects artist on the original Star Wars trilogy, Spielberg protege Joe Johnston found success as a director with his debut film, the blockbuster family adventure Honey, I Shrunk the Kids. For his sophomore outing, Johnston helmed this action-adventurer, set in 1930s Hollywood and in the spirit of old pulp comics and adventure serials, and co-adapted from the David Stevens graphic novel by Danny Bilson and Paul De Meo. Bill Campbell stars as Cliff Secord, an eager young pilot who finds himself in possession of a secret jet-pack that gives him the ability to fly. Cliff soon learns that screen-star Neville Sinclair (Timothy Dalton) will stop at nothing to get his hands on the rocket pack so he can give it to the Nazis. As The Rocketeer and with a little help from his mechanic friend played by Alan Arkin, it's up to Cliff to elude Sinclair, defeat the Nazis, and save his girlfriend Jenny (Jennifer Connelly).

Ele Keats
as Girl at Newsstand

Danielle Bedau
as Girl at Newsstand

News & Interviews for The Rocketeer

Critic Reviews for The Rocketeer

Audience Reviews for The Rocketeer