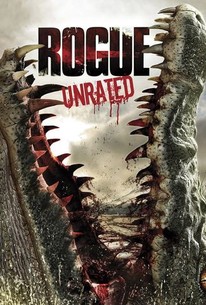 A handful of tourists looking for adventure get more than they bargained for when they cross paths with a massive man-eating beast in this thriller. Pete McKell (Michael Vartan) is a writer for an American travel magazine who has been assigned to write a story about vacationing in rugged Northern Australia. Pete signs up for a cruise along a river that's home to a large crocodile population, with tough but pretty Kate Ryan (Radha Mitchell) serving as guide. Pete soon finds he's roughing it in the Aussie wilds with an eclectic variety of travelers, including Russell (John Jarratt), who is dealing with the death of his wife; Simon (Stephen Curry), a tactless amateur photographer; and Allen (Geoff Morrell), a member of the British upper crust making the trip with his ailing spouse (Heather Mitchell) and their rambunctious daughter (Mia Wasikowska). While Kate's former husband, who also works on the river, makes a pest of himself in the early stages of the voyage, the travelers soon find they have more to worry about when their craft is attacked by a massive 25-foot crocodile, who is just clever enough to know how to trap its prey before enjoying them for dinner. Rogue was written and directed by Greg McLean, who made a splash among horror fans in 2005 with his debut film, Wolf Creek. ~ Mark Deming, Rovi