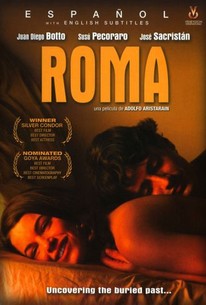 An aging author's life story sets the stage for an look back at the political turmoil and social upheaval of Argentina in the 1950s and '60s in this historical drama from filmmaker Adolfo Aristarain. Acclaimed novelist Joaquín Góñez (José Sacristán) has agreed to write his memoirs, and young Manuel Cueto (Juan Diego Botto) has been hired by his publisher to transcribe his dictation. Cueto, however, soon discovers his job is more complex than imagined; the disillusioned Góñez has been suffering from writer's block, and Cueto must ingratiate himself with the author in order to draw him out. Góñez was raised by a pair of open-minded musicians, and he enjoyed an especially cordial relationship with his mother, Roma (Susú Pecoraro). When his father died, Góñez and Roma were left on their own, and she had a difficult time adjusting to her loss while raising her son. As he grows older and the '50s give way to the '60s, Góñez (now also played by Botto) becomes a bohemian hipster who has quit school to hang out with his girlfriend, Betty (Carla Crespo), and their circle of creatively minded pals. As Góñez begins his life as a writer, he also becomes more aware of politics, and his activist friends soon find themselves roughly handled by the police; as his ideals are challenged and his romantic relationships begin to crumble, Góñez falls into a romance with his best friend's wife, leading to an emotional crisis that leads him back to Roma.

There are no critic reviews yet for Roma (Alma de bohemio). Keep checking Rotten Tomatoes for updates!