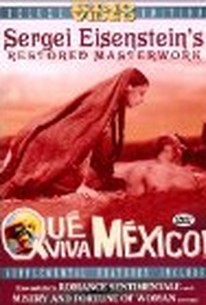 Some accounts claim that Eisenstein only attached his name to this sound short simply because he needed the money. It is, however, closer to the truth to say that this was a collaboration, although the exact extent of the collaboration between him and Grigori Alexandrov remains undetermined. The film itself is a short, experimental, slightly poetic montage of city and abstract images. Eisenstein's contribution seems to have been the soundtrack which demonstrates his theory of "contrapuntal use of sounds" or the attempt to find a common denominator between sound and image. The sound for Romance Sentimentale is drawn directly on the film's optical track and is the first instance of the use of this technique. This was not intended as a materialist film statement; it was rather an experiment towards an integrated film language. While the film's images are cursory, it retains historical importance as an experimental film predecessor and as the first sound film made by Soviets, even if not in the Soviet Union. ~ Brian Whitener, Rovi

There are no critic reviews yet for Romance Sentimentale (Sentimental Romance). Keep checking Rotten Tomatoes for updates!

There are no featured audience reviews for Romance Sentimentale (Sentimental Romance) at this time.