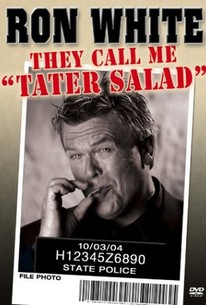 The Texas comic and co-star of Blue Collar Comedy Tour: The Movie ponders the absurdity of fashionable eyewear ("Why do sunglasses cost more than a 25-inch TV?") and much else in the live performance Ron White: They Call Me Tater Salad. Looking as if he just woke up from a nap (or is on his third beer), White contemplates eros with the inarguable "You see one woman nekkid... you want to see them all nekkid." A veteran of hurricane country, he contemplates those idiots who insist they're strong enough to sit out big storms: "If you're hit by a Volvo, it doesn't matter how many sit-ups you did that morning." On wedding anniversaries: "Diamonds--that'll shut her up." Some of White's material is unnecessarily crude for such a clever guy, but the best stuff, including a funny monologue about his half-mad, deer-hunting cousin, makes up for it. --Tom Keogh

Critic Reviews for Ron White - They Call Me Tater Salad

There are no critic reviews yet for Ron White - They Call Me Tater Salad. Keep checking Rotten Tomatoes for updates!

Audience Reviews for Ron White - They Call Me Tater Salad

There are no featured audience reviews for Ron White - They Call Me Tater Salad at this time.