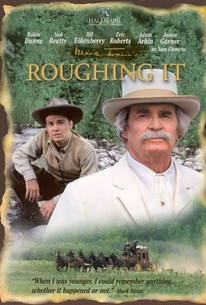 Based on Mark Twain's 1872 autobiographical novel, this made-for-cable film is presented in flashback form, as aged humorist Mark Twain (James Garner) is invited to be keynote speaker at the Bryn Mawr graduation ceremonies of 1891. At first worried that his reputation as a verbal japester will embarrass his daughter Suzy, who is among the graduates, Twain elects to throw all caution to the winds by delivering an inspirational speech in which he recalls his own early days as a Missouri-bred greenhorn on the wild western frontier. Admitting that his recollections may stretch the truth a bit ("When I was younger, I could remember it, whether it happened or not"), Twain spins a tale of two brothers, Sam and Orion Clemens ("Sam Clemens" was of course, Twain's given name). Envious over the fact that Orion (Greg Spottiswood) has landed a job as secretary to the governor of Nevada Territory, young Sam Clemens (Robin Dunne) insists upon tagging along, thereby launching an extended adventure which would include a rugged interlude digging for gold under the baleful eye of a brutal foreman (Eric Roberts), a bone-chilling winter, and an episode involving a gang of outlaws headed by a man (Ned Beatty) so mean that he bit off the ears of his victims as a "calling card." Also in the cast are Jill Eikenberry as Twain's wife Livy and Adam Arkin as a wild-eyed "character" named Henry. Filmed in Calgary, the four-hour miniseries version of Mark Twain's Roughing It was presented by the Hallmark cable channel beginning March 16, 2002.

Critic Reviews for Roughing It

There are no critic reviews yet for Roughing It. Keep checking Rotten Tomatoes for updates!

Audience Reviews for Roughing It

There are no featured audience reviews for Roughing It at this time.