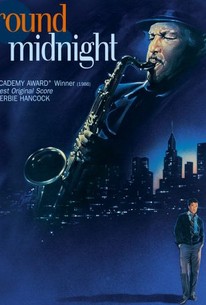 A French music lover befriends a once-great American jazz artist and attempts to save him from self-destruction in this moody drama. Saxophonist Dexter Gordon portrays Dale Turner, a fictional musician inspired by a number of famed jazz figures, including Bud Powell and Lester Young. Largely forgotten in his home country, Turner has moved to Paris in search of a more appreciative audience. He finds it in the form of Francis Borler (Francois Cluzet), a bebop aficionado who befriends the expatriate player. Borler soon becomes familiar with Turner's darker side, including his struggles with alcoholism, drug addiction, and depression. Fearing for the musician's life, the fan becomes his caretaker, an arrangement that leads to a brief improvement in Turner's health and fortunes but places great emotional strain upon them both. Director Bertrand Tavernier pays great attention to the visual and aural details of the jazz world, with outstanding musical supervision provided by Herbie Hancock. 'Round Midnight's greatest asset, however, is Gordon's Academy Award-nominated performance, informed by his own life experiences. His naturally fascinating presence combines with the film's obvious love of the music and its milieu to provide what many have hailed as one of the more authentic and affectionate presentations of the jazz world on the silver screen. ~ Judd Blaise, Rovi

Ron Carter
as Himself (Bass)

Eddy Mitchell
as A Drunk

Pierre Michelot
as Bass
View All

News & Interviews for 'Round Midnight

Critic Reviews for 'Round Midnight

Audience Reviews for 'Round Midnight