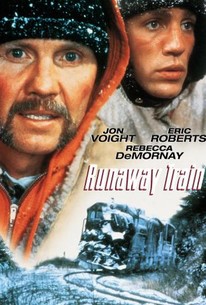 Charging forward with the momentum of a locomotive, Runaway Train makes great use of its adrenaline-fueled premise and star presences of Jon Voight and Eric Roberts.

Russian director Andrei Konchalovsky's second American film may well be the only existential adventure flick in Hollywood history. Two prisoners, Manny (Jon Voight) and Buck (Eric Roberts), escape from a desolate Alaskan maximum-security facility. They hop aboard a speeding train, making a clean escape. But the engineer has suffered a heart attack, and the train goes out of control. To prevent a disastrous head-on collision, the railroad heads decide to derail the runaway train, killing its occupants to save the lives of hundreds of others. Once Manny catches on to what's happening, he tries to jump off the train, only to be talked out of such a foolhardy act by railroad employee Sara (Rebecca DeMornay). As doom approaches, Manny apparently goes mad, viciously preventing any attempts to stop the train or rescue its passengers: if he's to die, and if the others are to be saved, it will be on his terms, or no terms. Runaway Train was slated as a project for Akira Kurosawa in 1970, but for various creative and scheduling reasons, it remained on the back burner for 15 years. ~ Hal Erickson, Rovi