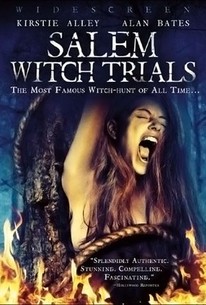 In the tradition of Arthur Miller's McCarthy-era play +The Crucible, this two-part TV dramatization of the Salem Witch Trials was heavily influenced by the present-day political scene. Rev. Parris (Henry Czerny), spiritual leader of Salem, Massachusetts, in 1692, needs a unifying issue to end the intramural squabbling between the town's Puritans. When the daughters of Ann and Thomas Putnam (Kirstie Alley and Jay O. Sanders) begin behaving in a bizarre, disruptive fashion, Parris knows that he has found something that can be transformed into a target of unilateral hatred for his flock. Before long, the Putnam girls and the family's servant Titubea (Gloria Reuben) have been labeled as witches, and eventually the hysteria spreads throughout the town, with anyone who doesn't agree with the status quo running the risk of public ostracism, and ultimately, execution for witchcraft (the eventual fate of 20 unfortunates). The climax is devoted to the notorious witch trials, staged at the behest of the Massachusetts colony's politically ambitious deputy governor (Peter Ustinov). Shirley MacLaine makes a rare TV appearance as the ill-fated Rebecca Nurse. Salem Witch Trials was presented by CBS on March 2 and 4, 2003.

Nadia Litz
as May Walcott