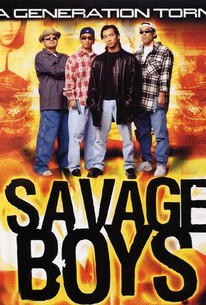 A former juvenile delinquent is determined his little brother will not follow the same path in life in this independent drama. Suggzy Sugimoto spent the earliest part of his childhood at California's Manzanar internment camp during World War II, and while the war eventual ended, Sugary found no easy path to slip back into conventional society. As a teenager, Suggzy fell in with an Asian youth gang after his parents were killed as he and his younger brother Marco looked on. Sugary spends twenty-five years in prison after shooting the men who took his parents lives; upon his release, Suggzy discovers Marco has taken up the same life of crime he left behind in prison, only with less cause and greater danger. Can Suggzy save Marco from the streets before he winds up dead or in jail? Also known as Savage Boys, Buddha Heads was the first feature for director Brian Maeda, and features Calvin Jung and Eddie Mui.

There are no critic reviews yet for Savage Boys. Keep checking Rotten Tomatoes for updates!

There are no featured audience reviews for Savage Boys at this time.