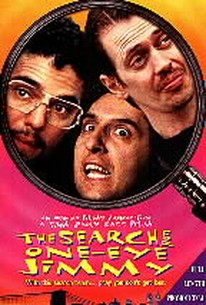 When Les, a young film director, goes back to his old Brooklyn enclave to shoot a movie, he has no idea what he's getting himself into. That's because the community is frantic to discover the whereabouts of local boy One-Eyed Jimmy, who has mysteriously disappeared. Les becomes sucked into the search for Jimmy -- and in the wacky misadventures of various neighborhood eccentrics, mobsters, the FBI and even the Catholic Church. Will One-Eyed Jimmy be found? And could Les's ordeal become the basis of his next movie?

There are no critic reviews yet for Search for One-Eye Jimmy. Keep checking Rotten Tomatoes for updates!

There are no featured audience reviews for Search for One-Eye Jimmy at this time.