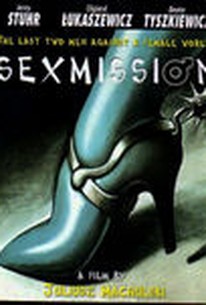 Co-writer and director Juliusz Machulski has come up with a hybrid sex sci fi comedy that defies categorization -- a humorous, male-fantasy that is set after a mythical World War III, in a surviving underground world of women only. Before the terrible onslaught of the final war, two scientists were frozen in a state of suspended animation with the intention of thawing them out in three years. When they are released from their ice-bound sleep, 50 years have passed instead and they find themselves the only two males in a female society that has thus far reproduced only in the test tube. The women cater to the men's every wish, and one of the scientists is definitely a happy camper, while the other firmly believes that a dedication to science negates sexual indulgences, but then, he is also willing to test his theory. When the charming Lamia (Bozena Stryjkowna) is converted from an heroic to a submissive state by virtue of her first kiss, the two men realize they can now adequately defend themselves against the more militant females. Their fate still hangs in the balance because the Council of Women may decide to neuter them after all. As a possible escape hatch, the men discover a way up to the surface of the earth, and they manage the journey with Lamia (now permanently converted) while another woman follows them out, trying to stop their exit. Once they are all on the surface, they experience several wonderful surprises -- and it looks like the future of humanity is assured a second chance. ~ Eleanor Mannikka, Rovi

There are no featured audience reviews for Seksmisja (Sexmission) at this time.