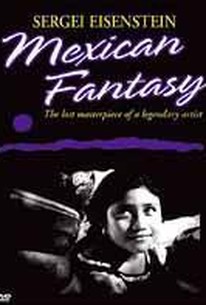 For this black-and-white Russian documentary, filmmaker Oleg Kovalov surveys the unfinished Mexican project of Sergei M. Eisenstein (1898-1948), an ambitious work originally titled Que Viva Mexico! After Paramount rejected the project in October 1930, it was financed by a group of investors that included novelist Upton Sinclair and the Gillette safety razor company. Some 285,000 feet (about 50 hours) were shot in 1931-32 by Eisenstein and cameraman Eduard Tisse before Sinclair called a halt to the filming. Eisenstein saw his rushes for the first time in 1932, but because of his contract with Sinclair, he was not allowed to edit his masterpiece. Kovalev's 98-minute selection features pyramids, palaces, priests, churches, ceremonial toreador preparations, funeral mourners, and erotic elements, daring for that decade. Over the past 65 years, at least a dozen films have mined Eisenstein's footage, including Sol Lesser's 1933 Thunder over Mexico (loosely based on Eisenstein's scenario); Lesser's short Death Day (1933); Lesser's two-reel Eisenstein in Mexico (1933); Marie Seton's 56-minute Time in the Sun (1940), a critical success assembled by Seton from the previously unused footage; six 1941 educational films about Mexico (Mexico Marches, Conquering Cross, Idol of Hope, Land and Freedom, Spaniard and Indian, Zapotec Village); and Mexico Symphony (a feature comprised of the first five of the six educational films). After Upton Sinclair donated all the remaining nitrate negative to the Museum of Modern Art Department of Film in the mid-'50s, former Eisenstein student Jay Leyda compiled and annotated his 255-minute Eisenstein's Mexican Films: Episodes for Study (1958), a film which made it possible to see full unedited sequences directly as they came from Eduard Tisse's camera. Kovalov's documentary was shown at the 1998 Berlin Film Festival. ~ Bhob Stewart, Rovi

There are no critic reviews yet for Sergei Eisenstein - Mexican Fantasy. Keep checking Rotten Tomatoes for updates!

There are no featured audience reviews for Sergei Eisenstein - Mexican Fantasy at this time.