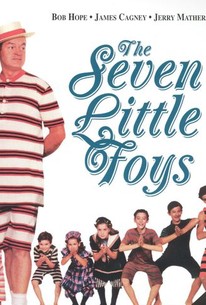 With his movie career fading in 1955, Bob Hope was amenable to writer/director Mel Shavelson's suggestion that Hope try something different. The Seven Little Foys was the first of Hope's two "straight" biopics (the second was 1956's Beau James). Though not completely abandoning his patented persona, Hope does an admirable job of impersonating legendary Broadway song-and-dance man Eddie Foy, right down to the soft-shoe shuffle and affected lisp. A successful "single" in vaudeville, Foy meets and marries lovely Italian songstress Madeleine Morando (Milly Vitale). The union results in seven children, moving the Foys' priest to comment "we're running out of Holy water" after the seventh baptism. Hardly an ideal family man, Foy leaves Madeleine and her sister Clara (Angela Clarke) behind in their Connecticut home to raise the kids, while he rises to spectacular career height. Returning home after attending a testimonial for George M. Cohan (James Cagney, who played this unbilled cameo on the proviso that Hope turn over Cagney's salary to charity), Foy discovers that his wife has died of pneumonia. Months pass: Foy sulks in his rambling house, while his seven kids run roughshod. Foy's manager (George Tobias) suggests that the entire family be assembled into a vaudeville troupe called The Seven Little Foys. Though the kids are profoundly bereft of talent, the act gets by on its charm, and before long Foy is a bigger success than ever. But when Foy and the kids are booked into the Palace on Christmas Day, Aunt Clara decides that the kids are being cruelly exploited, and arranges for the authorities to arrest the act on charges of violating a state law barring children from singing and dancing. The authorities decide to drop the charges when the kids rally around their father, declaring their genuine love for him--but the deciding factor is a quick demonstration that the kids can't sing or dance to save their lives! The Seven Little Foys is a standard Hollywood whitewash job, emphasizing Eddie Foy's virtues (including his on-stage heroism during the infamous Iroquois Theatre fire of 1903) and soft-pedaling or ignoring his faults (e.g. his capacity for alcohol). Wisely, the scenes between Bob Hope and the seven children playing the Little Foys (including Father Knows Best's Billy Gray, The Real McCoys' Lydia Reed and Leave It to Beaver's Jerry Mathers) are refreshingly free of cloying sentiment. Also, Hope is a good enough natural actor to convince us that he deeply cares for his children without gooey effusions of emotion. The film's hands-down highlight is the "challenge dance" between Foy (Bob Hope) and Cohan (James Cagney)--a lasting testament of the superb terpsichorean talents of both men. The Seven Little Foys was narrated by Eddie's son Charley Foy, a fine comedian in his own right.

Jerry Mathers
as Brynie at Age 5