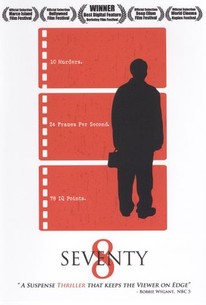 A small town falls under the spell of paranoia when a mentally challenged man returns home from an extended stay in an institution, and the locals become convinced that he's to blame for a recent rash of brutal murders. Ten years ago, Renny Meeks (Merk Harbour) was caught on camera committing a crime. A lowly grocery bagger with an IQ of 78, Renny was sentenced to a decade in an institution for his transgression. Meanwhile, the people of Arkham Heights never quite got over the crime. Upon returning home to Arkham Heights, Renny becomes the primary suspect in a series of murders that were captured on camera. The locals have no doubt that he's the killer, but check out girl Alice (Susana Gibb) isn't so sure. When Renny turns to Alice for help, she begins to suspect that her troubled ex-boyfriend Edward (Dameon Clarke) is framing him for the crimes. But Alice will need time if she hopes to prove Renny's innocence, and time is the last thing she's got as the locals decide to track Renny down, dispense will due process, and carry out his death sentence under mob rule.

There are no featured audience reviews for Seventy-8 at this time.