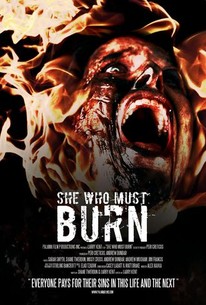 She Who Must Burn

She Who Must Burn Ratings & Reviews Explanation

She Who Must Burn Photos

Larry Kent's, "She Who Must Burn," is a feminist, political, horrific-thriller that examines the battle between personal rights and state sanctioned law. Angela, a strong-willed and determined young woman, refuses to leave the town's planned-parenthood clinic even after its been shut down by the state. Her refusal to comply angers the Baarkers; a dangerous and fanatical right-wing family whose influence in this land runs both deep and high. Not only do they head the church, but they also claim to be able to speak directly to God, who has ordered them to cleanse the land, and the sin that Angela represents. After receiving word that a young girl has had an abortion, the Baarkers hunt the child down. She narrowly escapes after watching her mother's murder, and makes her way to the clinic where Angela takes her in. With the young girl at her side, Angela vows to protect her, but the Baarkers are closing in fast. As the tension between the two sides rises, so does the danger, and each one is driven further than ever before to fight for what they believe.

Steve Bradley
as Daryl
View All

Critic Reviews for She Who Must Burn

There are no critic reviews yet for She Who Must Burn. Keep checking Rotten Tomatoes for updates!

Audience Reviews for She Who Must Burn

There are no featured audience reviews for She Who Must Burn at this time.

She Who Must Burn Quotes