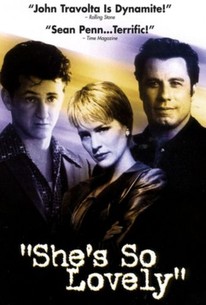 Written by the late John Cassavettes in 1987 and filmed by his son Nick a decade later, the comic drama She's So Lovely (originally and more appropriately titled She's De Lovely in honor of the Cole Porter composition central to the movie) stars real-life couple Sean Penn and Robin Wright-Penn as Eddie and Maureen, a young husband and wife whose relationship is strained by Eddie's frequently irrational behavior. When a run-in with a slimy neighbor (James Gandolfini) leaves the pregnant Maureen beaten and bruised, Eddie goes on the warpath, and his violent actions land him in a mental institution. Upon his release a decade later, he discovers Maureen has remarried (to a construction manager portrayed by John Travolta), had two more kids, and moved to the suburbs. Regardless, he resolves to win her back. A kind of reworking of the Cassavetes Sr. masterpiece A Woman Under the Influence, She's So Lovely marked the second film directed by Nick after Unhook the Stars.

James Bozian
as Intern No. 1

Paul Johansson
as Intern No. 2

Clayton Landey
as Attendant No. 1

Jason O'Malley
as Attendant No. 2

Dennis "Chicago" Fanning
as Cop No. 1

John Cundari
as Cop No. 2

Noon Orsatti
as Cop No. 3

News & Interviews for She's So Lovely

Critic Reviews for She's So Lovely

Audience Reviews for She's So Lovely