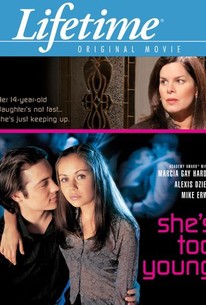 A syphilis outbreak rocks an upscale suburban high school in this made-for-cable movie. Freshman Hannah Vogul (Alexis Dziena) does everything her loving parents (Marcia Gay Harden and Gary Hudson) want: excels at music, makes good grades, and always tells the truth. That all changes when Hannah falls for the attentions of campus stud Nick Hartman (Mike Erwin). Supremely confident, the boy successfully pressures her to fellate him on their second date, then unsuccessfully invites her to an orgy for their third. Soon Dawn (Miriam McDonald), one of Nick's countless other conquests, confesses that she's contracted syphilis, which sets off an investigation by horrified public-health officials. When Hannah turns out to be one of dozens of infected students, her mother joins the crusade to bring their parents together and confront the underaged partying and casual sex that have led their children to this predicament. But with Hannah's self-esteem rocked by Nick's rejection and the ostracism of her peers, it may be too late to save her. She's Too Young premiered in February 2004 on the Lifetime cable network. Megan Park co-stars as Becca, another promiscuous 14-year-old, while Joe Dinicol appears as Hannah's supportive friend Tommy.

Critic Reviews for She's Too Young

There are no critic reviews yet for She's Too Young. Keep checking Rotten Tomatoes for updates!

Audience Reviews for She's Too Young