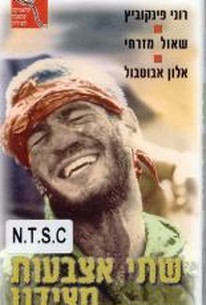 An unusual drama about Israeli soldiers in Southern Lebanon, this story combines reality and fiction so well that the borders between the two seem blurred. The message is simple: war is anarchic, the guilty and innocent are both killed, and there are no winners in the trenches. The personal lives of several soldiers provide the narrative framework. One soldier sees a pretty Lebanese woman while his patrol goes through her village and from that moment onward, he cannot get her out of his mind. Another feels a kinship with the Druse, his own people, who live on the opposite side of the border. A third tries to befriend a street urchin. Their inclination to reach out beyond their uniforms contrasts with the stifling routine of their military existence and the realities of Israeli-Arab politics. ~ Eleanor Mannikka, Rovi

There are no critic reviews yet for Shtei Etzbaot Mi'Tzidon (Ricochets). Keep checking Rotten Tomatoes for updates!