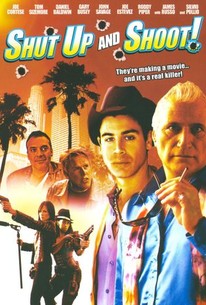 Shut Up and Shoot!

A sleazy movie producer hatches a plan to shake the entire film industry in this dark satire of Tinseltown politics featuring Gary Busey, Joe Estevez, James Russo, and John Savage. Underhanded producer Spencer Spector (Joseph Cortese) isn't above resorting to mischief in order to turn out a genuine hit, so when his latest film "The Last Rock and Roll Cowboy" opens on the big screen, he pirates 500,000 copies of the other two movies that opened that weekend to ensure the numbers are good. Yet while Spencer's film has a $14 million opening weekend and lead actor Sonny Westwood proves an overnight sensation with moviegoers, the production company still doesn't manage to turn a profit. Fortunately, Spencer has a plan for breaking even: If he can just convince Sonny to kill all five of his producing partners on camera, Spencer may finally have a shot at revolutionizing the movie Industry. Later, after enlisting the aid of two desperate female filmmakers they met at a local bar, Spencer and Sonny start rolling camera on the ultimate snuff film. Each murder pays special homage to some of Hollywood's biggest hits, securing the murderous auteurs a permanent place in the curious annals of cinema history.

Critic Reviews for Shut Up and Shoot!

There are no critic reviews yet for Shut Up and Shoot!. Keep checking Rotten Tomatoes for updates!

Audience Reviews for Shut Up and Shoot!

There are no featured audience reviews for Shut Up and Shoot! at this time.

Shut Up and Shoot! Quotes