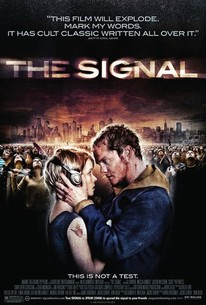 The Signal is gruesome, funny, and has big thoughts about society, but those disparate elements fail to come together convincingly.

As glasses are raised for a New Year's Eve toast, the denizens of the city of Terminus fall prey to a mysterious transmission that pulses through all electronic devices and transforms rational, sane people into murderous, rampaging psychopaths. All forms of communication have been jammed, and now the airwaves have been saturated with an ominous signal that preys on fear and deep-rooted desire. Though Terminus was once a city defined by conformity, any semblance of order in this concrete jungle has now been replaced with screaming, bloody chaos. Fortunately, Ben has managed to avoid having his brain scrambled by the signal, and now he's determined to make his way through the bedlam that's sweeping the streets and rescue the woman he loves. It's not going to be an easy task, though, and in order to sweep his love to safety, Ben will first have to face off against her rabid husband. In a city where everyone seems to have lost their mind, the only way Ben will be able to determine who he can trust and who has given in to their bloodlust is to find out the true origins of this ominous broadcast.

News & Interviews for The Signal

Critic Reviews for The Signal

Audience Reviews for The Signal