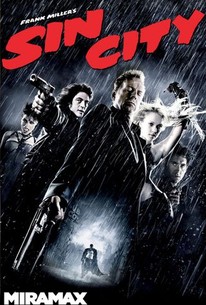 The Eisner Award-winning comic series Sin City comes to life in this live-action feature adaptation from director Robert Rodriguez and creator Frank Miller. Interweaving multiple storylines from the series' history, this violent crime noir paints the picture of the ultimate town without pity through the eyes of its roughest characters. There's the street thug Marv (Mickey Rourke), whose desperate quest to find the killer of a prostitute named Goldie (Jaime King) will lead him to the foulest edges of town. Inhabiting many of those areas is Dwight (Clive Owen), a photographer in league with the sordid ladies of Sin City, headed by Gail (Rosario Dawson), who opens up a mess of trouble after tangling with a corrupt cop by the name of Jackie Boy (Benicio Del Toro). Finally, there's Hartigan (Bruce Willis), an ex-cop with a heart problem who's hell-bent on protecting a stripper named Nancy (Jessica Alba). Featuring a who's who supporting cast that includes Elijah Wood, Brittany Murphy, Devon Aoki, and Nick Stahl, Sin City promises to be one of the most direct translations from page to screen of a comic series, with shots and dialogue adapted straight from the original comic's panels. Rodriguez quit the Director's Guild when they refused to let Frank Miller co-direct the film, a deal hashed out after the two collaborators developed and shot the opening scene utilizing a green-screen process to harness the stark, black-and-white look of the books as a litmus test for the rest of the production. Quentin Tarantino was brought in and reportedly paid one dollar to direct an extended scene between Del Toro and Owen that amounts to one issue of The Big Fat Kill miniseries. ~ Jeremy Wheeler, Rovi

Josh Hartnett
as The Man

Marley Shelton
as The Customer

Nicky Katt
as Stuka
View All