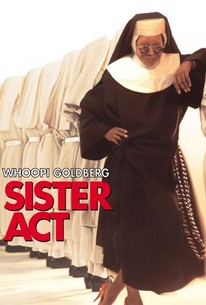 Looking for a sweet musical comedy about a witness to a crime hiding out from killers in a convent? There's nun better than Sister Act.

A sleeper hit that received a lukewarm reception from critics but was a success with audiences, Sister Act (1992) was star Whoopi Golberg's first bona fide smash after her Oscar victory for Ghost (1990). Goldberg stars as Deloris Van Cartier, a Reno lounge singer who accidentally witnesses a brutal murder carried out by her gangster boyfriend Vince (Harvey Keitel). Under the protection of a detective (Bill Nunn) who's trying to bring down Vince's criminal operation, Deloris is placed in protective custody at a San Francisco convent. Masquerading as a nun renamed Sister Mary Clarence, Deloris shakes up the established order of the sisters' lives, particularly enlivening their choral efforts. Although running constantly afoul of the Mother Superior (Maggie Smith), the new, jazzed-up musical act becomes a huge hit in the community, even drawing the attention of the Pope, but also alerting Vince to Deloris' whereabouts. Although credited to the pseudonymous Joseph Howard, Sister Act was actually written by Paul Rudnick and Carrie Fisher. The film was followed by a sequel, Sister Act 2: Back in the Habit (1993). ~ Karl Williams, Rovi

Eugene Greytak
as The Pope