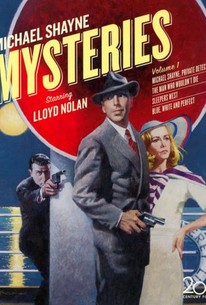 This second entry in 20th Century-Fox's "Michael Shayne" series was a remake of the 1932 Fox romantic drama Sleepers East. In the original, the detective character was peripheral, but this changed once Michael Shayne (Lloyd Nolan) was written in as the leading character. Dogged by persistent girl reporter Kay Bentley (Lynn Bari), private detective Shayne tries his best to secretly escort murder-trial witness Helen Carlson (Mary Beth Hughes) by train from Denver to San Francisco. Helen's testimony will free a man falsely accused of murder, which will also effectively destroy the election chances of a machine politician. Thus, Mike has to protect Helen from any and all likely assassins, including hired torpedo Carl Izzard (Don Costello), who manages to inveigle Kay's wishy-washy fiance Tom Linscott (Don Douglas) into his camp. Meanwhile, the incognito Helen strikes up a clandestine relationship with fellow passenger Everett Jason (Louis-Jean Heydt), who is harboring a few secrets of his own. Based on a story by Frederick Nebel (or "Torchy Blaine" fame), Sleepers West is full of chock-full of fascinating characterizations and startling little surprises, and is considered by many to be the best of Fox's "Michael Shayne" installments.

There are no critic reviews yet for Sleepers West. Keep checking Rotten Tomatoes for updates!