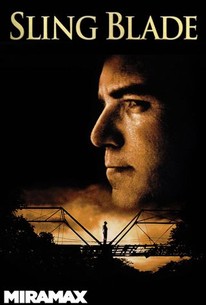 You will see what's coming, but the masterful performances, especially Thornton's, will leave you riveted.

Sling Blade marked the directorial debut of country singer turned actor Billy Bob Thornton, who also authored the script (expanding George Hickenlooper's acclaimed short Some Folks Call it a Sling Blade) and stars in the picture. Thornton plays Karl Childers, a mildly retarded man who spent most of his life in a mental institution. When Karl was a boy, he was severely mistreated by his abusive father (Robert Duvall). At age 12, Karl found his mother having intercourse with a man who tormented him endlessly; he snapped, flew into a homicidal rage, and killed both individuals by decapitating them. Years later, as a middle-aged man, Karl is deemed harmless to society and released from the mental institution where he resides. Karl says he has learned his lesson and adds, "I reckon I got no reason to kill no one." He returns to the town of his boyhood, where he's befriended by Frank (Lucas Black), the son of a widowed mother who sees the eccentric but open-hearted Karl as a kindred spirit. Karl also gets a job at a fix-it shop and resides in the backroom, until Frank's mother, Linda (Natalie Canerday), takes a liking to Karl and lets him stay with them. However, Karl also meets Doyle (Dwight Yoakam), Linda's boyfriend, a sadistically cruel, narrow-minded drunk who tosses casual abuse at Frank, treats Linda like dirt, and mocks Karl endlessly. The late John Ritter co-stars as Linda's friend Vaughan, a mild-mannered homosexual who works at the neighborhood dollar store. Musicians Col. Bruce Hampton and Vic Chesnutt are among Doyle's party guests. ~ Mark Deming, Rovi