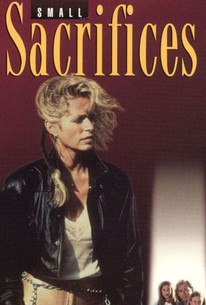 Based on the factual book by Ann Rule, Small Sacrifices was original telecast in two parts. Farrah Fawcett continues to successfully obliterate the Charlie's Angels onus in the role of real-life US postal worker Diane Downs. Part One of the film was set in Willamete Valley, Oregon, in 1983. Mrs. Downs drives her three children to the local hospital's emergency entrance: one child is already dead, and the other two have been seriously wounded. Diane claims that the killer was a man who'd tried to steal her car. But in Part Two, prosecutor John Shea rips apart Diane's story in court. What comes to surface is a tawdry tale of a neurotic, narcissistic woman who is pushed over the edge when spurned by her lover (played by Ms. Fawcett's offscreen companion Ryan O'Neal). As difficult as Small Sacrifices was to watch during its initial telecast in November 1989, it has since been rendered doubly disturbing by the more recent tragic events surrounding South Carolina housewife Susan Smith.

There are no critic reviews yet for Small Sacrifices. Keep checking Rotten Tomatoes for updates!

There are no featured audience reviews for Small Sacrifices at this time.