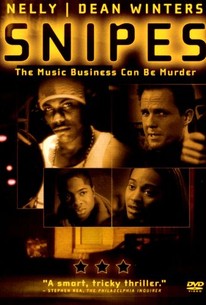 Music video director Richard Murray makes his feature debut with this hip-hop crime thriller about an ambitious kid caught in the shady underworld of the recording industry. Sam Jones III (Erik Triggs) is a wannabe rap artist working menial jobs at Ill Wax Records by day and sneaking into the studio and laying down some tracks by night. His activities have already attracted the welcome attention of Cheryl (Zo Saldana), a bodacious marketing executive. Meanwhile, the company's villainous president Bobby Starr (Dean Winters) is bullying rap phoneme Prolifik (Nelly) into doing his debut record Bobby's way. On the same night that Sam and his buddy Malik sneak into the studios, Prolifik and his master tapes are abducted and soon the prime suspect appears to be none other than Sam. With the wrathful Starr on his tail and the cops closing in, Sam is forced to find the crook responsible the crime and fast. This film played at the 2001 Toronto Film Festival.

Pace Won
as Gunman Outside Tenament No. 1

Young Zee
as Gunman Outside Tenament No. 2

Jonathan Dunmeyer
as Goon with Shotgun

Tiffany Jackson
as Stripper in Bar

William Maddox
as Kid on Scooter

There are no featured audience reviews for Snipes at this time.