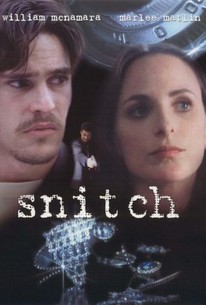 A criminal burns his bridges with his fellow outlaws and lives to regret it in this drama. John Shakley (William McNamara) is a small-time crook who has decided it's time to put his life back on the straight and narrow. However, his efforts to stay on the right side of the law are foiled by two longtime acquaintances -- an old buddy and John's former girlfriend approach him, hoping he can help them fence a cache of stolen jewelry. John can't turn his back on his friend and wants to convince his girl to come back to him, so he reluctantly agrees to the proposition. However, he discovers the jewels are too hot to be moved through any channels he knows, and in order to save his own skin, he's forced to turn himself in to the police. When John's partners discover he's turned informer, John quickly learns he's only traded one sort of grave danger for another. Snitch also stars Marlee Matlin and Tisha Campbell.

There are no critic reviews yet for Snitch. Keep checking Rotten Tomatoes for updates!

There are no featured audience reviews for Snitch at this time.