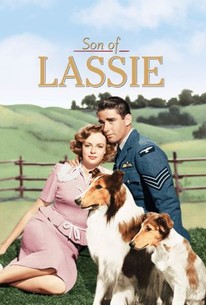 Son of Lassie is about a courageous collie named Laddie, played by a dog named "Pal". A sequel to Lassie Come Home, the film stars Peter Lawford and June Lockhart as the grown-up counterparts of the characters played in the earlier film by Roddy McDowall and Elizabeth Taylor. When WW2 breaks out, young Yorkshireman Joe Carraclough (Lawford) signs up with the British air force, bringing Laddie along. The inquisitive canine sneaks aboard the plane which takes Joe on his first mission. Their aircraft hit by enemy fire, Joe and Laddie are forced to parachute into Nazi-occupied Norway. Injured in the landing, Joe lies in a daze while the dog seeks help for his master. Once Laddie ascertains that the Nazis aren't his friends, the film evolves into one long chase, as dog and master try to make their way back to their own lines?while back at home, Joe's sweetheart Priscilla (June Lockhart, who of course would later costar in the Lassie TV series) bites her nails in anticipation. ~ Hal Erickson, Rovi

Nigel Bruce
as Duke of Rudling

Billy Severn
as Hentik
View All

Critic Reviews for Son of Lassie

Audience Reviews for Son of Lassie