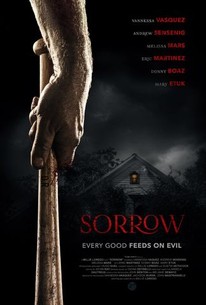 Fieldhouse, Texas October 12, 1992, Detective Salinas is involved in one of the worst discoveries ever in this small town. Police cars and ambulance surround the crime scene. Two corpses are found inside -- of accused American Spree Serial Killers. THREE WEEKS AGO -- La Sal, Utah. A woman by the name of Mila Sweeney is kidnapped while on the way to her mother's house. Serial Killers at large are eluding the state troopers. One has just escaped a psychiatric ward. Group finds refuge in the outskirts of La Sal a small town. Days later, Mila's Mother comes, knocking at this house. Mila is inside. In front of her eyes, serial killers kill her mother. Then take poor Mila to their hometown in Texas where they keep her days on torturing her. The woman survives and eventually escapees. Sorrow is a story about revenge. When a young woman takes matters into her hands to exact revenge on her mother's killers. She is confronted with the results of her actions, as local police are moving in closer.

Brenden Whitney
as Gambit
View All

There are no critic reviews yet for Sorrow. Keep checking Rotten Tomatoes for updates!

There are no featured audience reviews for Sorrow at this time.