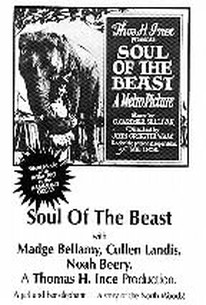 Soul of the Beast

This comedy-drama featured Madge Bellamy's most unusual co-star -- an elephant named Oscar. Ruth Lorrimore (Bellamy) works at a circus where her only friend is Oscar. The cruel circus owner (Bert Sprouts) forces her to take the place of the "wild girl" and while she's locked in a side show cage, a cyclone hits. Oscar manages to save her, and she rides him to the Canadian Northwoods, where she meets Paul Nadeau, a crippled young musician (Cullen Landis). Caesar Durand, the town bully (Noah Beery), makes things tough for both Ruth and Nadeau until Oscar finally has enough and gives the villain his due. According to her interview in Speaking of Silents by William M. Drew, Bellamy felt the film did her career no good, calling her performance "disreputably coy."

Vernon Dent
as The Boob

Critic Reviews for Soul of the Beast

There are no critic reviews yet for Soul of the Beast. Keep checking Rotten Tomatoes for updates!

Audience Reviews for Soul of the Beast

There are no featured audience reviews for Soul of the Beast at this time.

Soul of the Beast Quotes