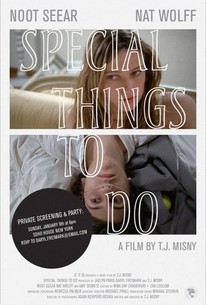 Special Things to Do

Follows CC, a young tennis superstar who, following a career-altering injury has become a self-loathing shell of her former self. In an effort to improve her public image, her handlers arrange the ultimate PR-booster: she'll spend the afternoon in a lavish hotel with one of her biggest fans, a terminally ill fifteen-year-old boy, Cliff Finley. While Cliff is surprised to see his idol as a deeply flawed and vulnerable creature, CC is thrown for an emotional loop when Cliff attempts to lose his virginity with her. What follows is a strangely affecting, darkly witty journey of self- discovery for two lost and isolated young people: one haunted by the possibility that he'll never achieve his goals, the other devastated by the realities of achieving them.

Critic Reviews for Special Things to Do

There are no critic reviews yet for Special Things to Do. Keep checking Rotten Tomatoes for updates!

Audience Reviews for Special Things to Do

There are no featured audience reviews for Special Things to Do at this time.

Special Things to Do Quotes