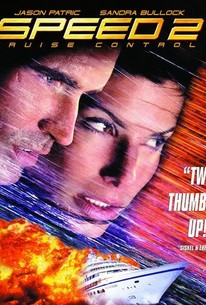 Speed 2 falls far short of its predecessor, thanks to laughable dialogue, thin characterization, unsurprisingly familiar plot devices, and action sequences that fail to generate any excitement.

Indications were that this action sequel was in trouble before production began, when the male lead from the first film, Keanu Reeves, declined a role in the follow-up. Sandra Bullock returns as Annie Porter, an accident-prone ditz who is thrilled when her boyfriend Alex (Jason Patric) presents her with two tickets for a cruise ship vacation to the Bahamas. The trip is a peace offering presented because Annie has just learned that Alex is a police officer who's been lying to her about his choice of profession. Little does the happy couple know that the disgruntled John Geiger (Willem Dafoe), designer of the ship's computer system, has plotted a violent takeover of the vessel and a diamond hijacking that puts everyone on board in mortal danger. Being the dashing police officer he is, Alex leaps into action and tries to stop Geiger, but not before the ship crashes at top velocity into a Caribbean port town. Sandra Bullock agreed to star in this flop of a sequel in order to get financial backing for a pet project, Hope Floats (1998), a low-budget drama that turned a healthy profit. ~ Karl Williams, Rovi

Christopher Wynne
as Supertanker Officer No. 1

Robert Herrick
as Supertanker Officer No. 2

Kathryn Rossetter
as Mother at Condo

Ben Meyerson
as Bridge Officer No. 1

Jennifer S. Badger
as Passenger No. 1

Cheryl Bermeo
as Passenger No. 2

Jeff Brockton
as Passenger No. 3

Don Pulford
as Passenger No. 4

Cliff McLaughlin
as Passenger No. 5

Matthew G. Taylor
as Passenger No. 6

P.J. Wagner
as Passenger No. 7

May Boss
as Passenger No. 8

Nancy Collet
as Passenger No. 9

Wilma Edward
as Woman on Phone
View All