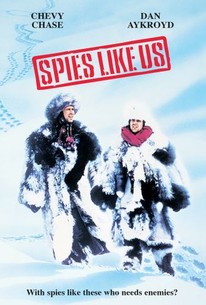 Despite the comedic prowess of its director and two leads, Spies Like Us appears to disavow all knowledge of how to make the viewer laugh.

Director John Landis helmed this Cold War farce starring Dan Aykroyd and Chevy Chase as Austin Millbarge and Emmett Fitz-Hume -- two loser misfits who dwell in the lower ranks of the Central Intelligence Agency. Convinced despite much evidence to the contrary that they're prime secret agent material, both men keep taking service exams in an effort to win promotion. Caught cheating on their latest round of tests, Austin and Emmett expect to be fired but are instead made full field agents and ushered into intense training. Little do they know that it's all a ruse and that they're about to be dumped in Pakistan to throw Russian spies off the scent of two real agents with an important clandestine assignment. A spoof of the "road" pictures popularized by Bing Crosby and Bob Hope, the film features a cameo by the latter as his golf-playing self.

Tony Cyrus
as The Khan

Bob Hope
as Himself

Gurdial Sira
as The Khan's Brother

Edwin Newman
as Himself