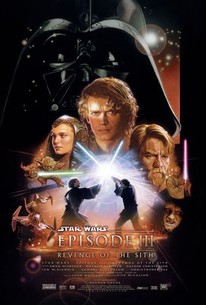 With Episode III: Revenge of the Sith, George Lucas brings his second Star Wars trilogy to a suitably thrilling and often poignant -- if still a bit uneven -- conclusion.

George Lucas draws the Star Wars film series to a close with this dark sci-fi adventure which sets the stage for the events of the first film and brings the saga full circle. After a fierce battle in which Obi-Wan (Ewan McGregor) and Anakin (Hayden Christensen) join Republic forces to help free Chancellor Palpatine (Ian McDiarmid) from the evil Count Dooku (Christopher Lee) and his minions, Anakin is drawn into Palpatine's confidence. Palpatine has designs on expanding his rule, and with this in mind he plants seeds of doubt in Anakin's mind about the strength and wisdom of the Jedis. Anakin is already in a quandary about how to reveal to others the news of his secret marriage to Padmé Amidala (Natalie Portman) now that she is pregnant, and visions which foretell her death in childbirth weigh heavy on his mind. As Anakin finds himself used by both the Jedis and the Republic for their own purposes -- particularly after Mace Windu (Samuel L. Jackson) expresses his distrust of the young Jedi -- he turns more and more to the Force for help, but begins to succumb to the temptations of its dark side. Many of the Star Wars series regulars returned for Star Wars: Episode III -- Revenge of the Sith, including Frank Oz as the voice of Yoda, Anthony Daniels as C-3PO, Kenny Baker as R2-D2, and Peter Mayhew as Chewbacca. ~ Mark Deming, Rovi

Keisha Castle-Hughes
as Queen of Naboo