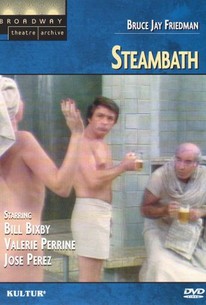 Bruce Jay Friedman's acclaimed off-Broadway play, which offers a decidedly unusual perspective on the afterlife, is brought to the screen in this production originally created for public television. Tandy (Bill Bixby) is a New York Police Department employee who suddenly and unexpectedly finds himself enjoying a steam at a public bathhouse overseen by an elderly Hispanic gentleman, Morty (Jose Perez). As the evening wears on, Tandy and Morty are joined by several other guests -- a stock trader (Kenneth Mars), a cabbie (Stephen Elliott), an attractive woman (Valerie Perrine), and a schlubby nebbish (Herb Edelman) -- and it begins to dawn on Tandy and his companions that they've all recently died, and that the steam bath is actually the waiting room to the next life, where Morty is judging their fates.

Valerie Perrine
as Meredith
View All

There are no critic reviews yet for Steambath. Keep checking Rotten Tomatoes for updates!

There are no featured audience reviews for Steambath at this time.