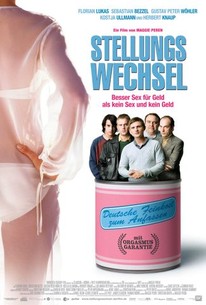 The subject of male prostitution gets a distinctly zany and offbeat twist in Stellungswechsel (AKA Special Escort), Maggie Peren's tale of five male underdogs who promulgate themselves as female escorts in the city of Munich. Of that group, we meet policeman Gy (Sebastian Bezzel, in hot water with his insurance company and enduring the vicissitudes of an on-again, off-again romance with comely Daphne (Lisa Maria Potthoff) ; twentysomething Lasse (Kostja Ullmann), who lives with his mom and is constantly, pathetically henpecked by her; Giselher (Herbert Knaup) , a chronically unemployed former manager; Frank (Florian Lukas), a philologist who spends his days tending house while his wife works; and the obese Olli (Gustav Peter Woehler), a deli proprietor whose business is rapidly going under. These five conjure up the wild idea of charging for liaisons with emotionally needy women, and gain some much needed publicity when the press latches onto their ploy, but the scheme doesn't exactly go as planned - and none can even begin to anticipate the eccentricities or oddities of the female clients who turn up in response to their offer.

There are no critic reviews yet for Stellungswechsel (Special Escort). Keep checking Rotten Tomatoes for updates!

There are no featured audience reviews for Stellungswechsel (Special Escort) at this time.