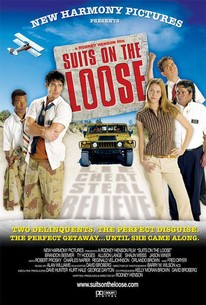 Suits on the Loose

A pair of escaped juvenile delinquents discovers that missionary life is just as restrictive as life in their state-sponsored correctional facility after posing as Mormon missionaries to elude detection in director Rodney Henson's religious-themed comedy. Justin (Brandon Beemer) and Ty (Ty Hodges) are two rebellious teens who just can't seem to grasp the concept of authority. Shortly after making a successful escape from their Mojave Desert detention center run by the overzealous General Wilkins (Charles Napier), the pair's perfect escape plan hits a snag when their car dies at a remote rest stop where Mormon missionaries Elder Talbot (Shaun Weiss) and Elder Johnson (Jason Winer) are taking a break before heading to their next assignment in nearby New Harmony. Soon swapping their military fatigues for Mormon missionary duds, Justin and Ty hit the road in their new car assured that the authorities will never suspect their true identities. Though they were correct in their assumption, the one thing that Justin and Ty never expected was to be offered a police escort to New Harmony -- where the ultra-religious locals have big plans for their newly arrived guests. Now stuck in a town where the lights go out at ten, the alarm goes off at six, and God's word is the law, these two identity-thieving delinquents are eventually forced to choose between living a life of lies or finally coming clean about their shady past.

Critic Reviews for Suits on the Loose

Audience Reviews for Suits on the Loose

There are no featured audience reviews for Suits on the Loose at this time.

Suits on the Loose Quotes