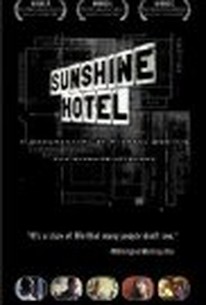 Filmmaker Michael Dominic is a native New Yorker who first learned about the flophouses of the Bowery when he was working as a waiter at a neighborhood restaurant. Years later, after hearing a David Isay piece on NPR, Dominic decided to make a documentary about the Sunshine Hotel. Having never made a documentary before, Dominic prepared by reading Michael Rabiger's seminal primer, Directing the Documentary. Nathan Smith, the talkative and friendly manager in residence of the hotel, is the key to Dominic's film. He narrates the film, and was instrumental in providing Dominic with access to the other residents. With simple, handheld digital camera work, Dominic shows the tiny single rooms the men live in, with their chicken wire ceilings. He interviews several of the residents, allowing them to describe their circumstances in their own words. The men who consented to be interviewed present themselves well, but occasionally, deeper problems with drugs, alcohol, or mental illness come to the surface. For example, Bruce, who runs errands for hotel residents to make his meager living, is a garrulous man. He has a slightly inflated view of his own job skills, and a drinking problem (which he's aware of), but seems to function fairly well. During one conversation with Dominic, late in the film, he describes a criminal act he committed long ago, and in denying his own culpability, is reduced to a paroxysm of rage. Some of the men talk about their dreams of contacting their families, or of leaving the hotel. Ray, a former resident who still works at the hotel, gives a harsh view of the hotel's residents, and how their problems with drugs and women have landed them on the Bowery--lonely, paralyzed, and hopeless.

There are no featured audience reviews for Sunshine Hotel at this time.