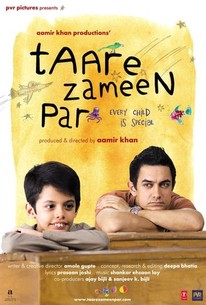 A young boy prone to colorful flights of fancy finds his hyperactive imagination may serve a greater purpose after being sent away to boarding school by his frustrated parents. Ishaan Awasthi is an eight-year-old boy who dedicates more time to dreaming up wondrous worlds of animals and kites than he does to finishing up his schoolwork. When Ishaan gets in trouble at school and his parents reach the end of their rope, it's quickly decided that the best thing for everyone is to send the boy away to a school where he can be properly disciplined. Upon arriving at his new school, Ishaan is disheartened to find that things there are much the same as they were back home; he's still a misfit, but now he doesn't even have his parents to talk to. Later, newly arrived art teacher Ram Shankar Nikumbh arrives at Ishaan's boarding school looking to liven things up by getting his students to think outside the box. Not surprisingly, the vast majority of students respond to their free-thinking new teacher with great enthusiasm -- all except for Ishaan, that is. When Ram notices just how unhappy his most imaginative young student really is, he vows to break through to Ishaan and unlock the promising young student's full potential. ~ Jason Buchanan, Rovi